What is austempered ductile iron (ADI) and how is it obtained?

Austempered ductile irons are ferrous materials in the form of foundry casting, characterised by the fact that they have an ausferritic ferrous matrix. They are obtained by heat treatment consisting essentially of an austenitization stage, followed by an isothermal quenching stage at a temperature higher than “Martensite start” (“Ms”).

The microstructure of austempered ductile irons consists of a ferrous matrix in which graphite nodules are distributed.

Another important difference compared to a steel is the high content of silicon, necessary to give the carbon the diffusivity to prevent, in the solidification phase, the formation of undesired structures such as carbides.

The two characteristics, nodules and silicon, determine the difference in mechanical behaviour compared to a steel structure, without diffused discontinuities and characterised by typically lower silicon content.

Carbon and silicon act favourably by significantly lowering the melting temperature, allowing the obtaining of sound castings in easier way than a corresponding steel casting. 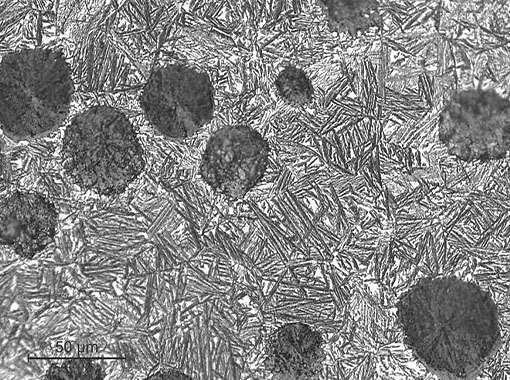 The mechanical characteristics of ductile iron depend on a number of factors. In the quasi-static tensile test (ISO 6892-1), the maximum resistance Rm and the proof stress Rp0.2 are essentially due to the isothermal quenching temperature, while the elongation at fracture A5 depends, in addition to this temperature, also on the other parameters of the heat treatment (austenitization temperature, austenitization time, dwell time at isothermal temperature), as well as the chemical composition, nodularity and, more generally, the quality of the processes for obtaining castings and the heat treatment. Impact strength (ISO 148.1) at room temperature and low temperatures is even more sensitive to these factors.

Austempered ductile irons (ADI) have numerous advantages when compared to conventional steels and cast irons. We summarise the main ones:

The mechanical characteristics of ADI cast irons are comparable with those of quenched and tempered steels, considering an important limitation: in the tensile test, the fracture of the ADI occurs near the maximum load Rm, typically before the onset of necking.

The difference in dislocative motions during the collapse phase also appears in a reduced impact energy for ADI cast irons compared to steels that, on the external surfaces of the specimen, can effectively use the condition of “plane stress” at the edges (shear lips advantage).

This difference has no effect in fatigue behaviour, nor in the fracture toughness test in true “plane strain”, i.e. in all operating conditions in linear elastic regime.

The difference reappears, as well as in the tensile test, also in fracture mechanics when, as frequently happens, the prevailing stress condition is “plane stress” and not “plane strain”.

Thanks to their mechanical properties, austempered ductile irons (ADI) find space today in various market sectors that also differ greatly from each other in terms of technical requirements and conditions of use.

In the industrial world, ADI applications have also been developed in recent years for vehicles such as forklift trucks and telehandlers as well as for packaging systems.

ADI ductile irons are also used in the earthmoving sector, typically for the production of components for the undercarriage (such as for the drive wheels) and in the agricultural sector where ADI applications find space in coupling systems (hooks and quick couplings), in tools (such as branch cutting blades for forestry use) but also in suspension systems, in the undercarriage and axles (track axles, suspension arms and axle stubs).

Finally, in the railway sector there is no shortage of ADI components for railway bogies, braking systems and railway switches. This versatility is only possible thanks to the excellent and unique mechanical properties of austempered ductile irons (ADI) that lead these materials to being comparable, often in a winning way, to construction steels, wear-resistant materials (even superficially treated) and traditional ductile irons.

The main reference standards for ADI ductile irons are the following:

The classification of grades is similar in all three norms.

The main difference between ISO/EN and American ASTM/SAE is the adoption of the A4 metric of the American standards instead of the A5 adopted in the ISO/EN.

With the same material, the American percentage elongation is greater than ISO/EN, as highlighted in ISO 17804 Annex B. Another evidence to be noted is the grade SAE AD 750, not present in the other standards, which explicitly describes this grade as intercritical with the presence of proeutectoid ferrite (see SAE J2477 5.1.1).

The basic requirements of austempered ductile irons (ADI) include the thickness of the casting and the content of alloying elements present: each of these factors exerts a certain influence on the material.

For the same thickness, different balance of alloying elements can be chosen which, in combination with the austenitization temperature, determine the same effect in the shifting of the CCT curves, necessary to avoid the pearlitic nose.

However, the combination of different chemistry and the austenitization temperature have an important effect on the final ausferritic transformation.

Partners of the Zanardi Academy project