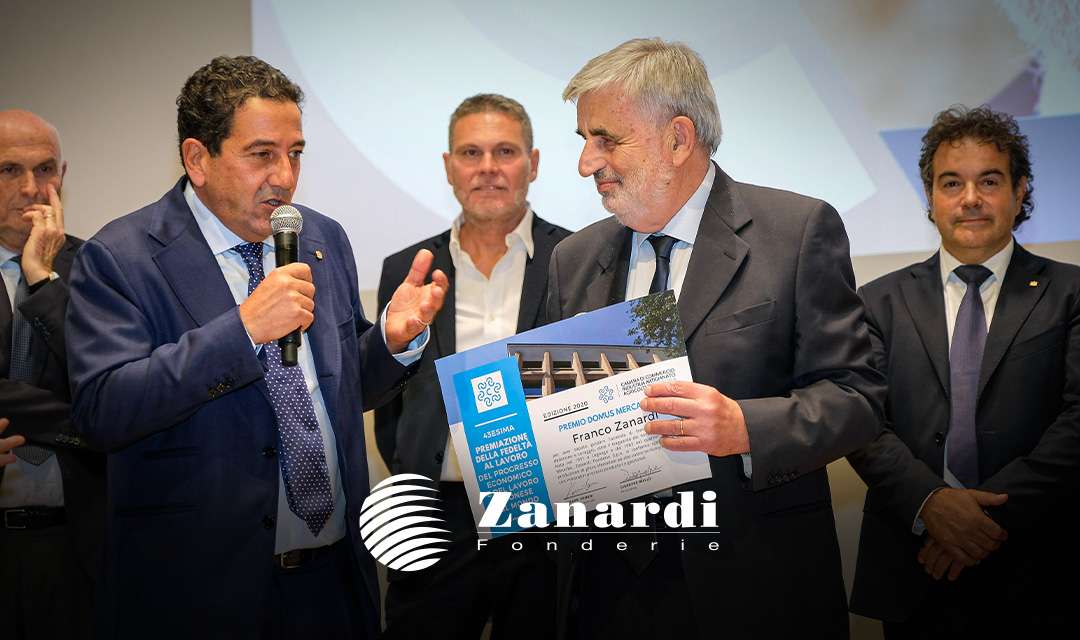 The ‘Domus Mercatorum’ award acknowledged the dedication, zeal and tenacity that made it possible to celebrate 90 years of Zanardi Fonderie’s history

Franco Zanardi, our honorary president, was awarded the prestigious accolade “Domus Mercatorum” as “Entrepreneur of the Year” by the Verona Chamber of Commerce. The award, presented at the end of the “Loyalty to Work” ceremony, honours Franco Zanardi for his ongoing commitment, loyalty and passion.

During the award ceremony, held in the Auditorium of the Verona Chamber of Commerce, Franco Zanardi praised the organisation and president Giuseppe Riello, retracing the steps that led Zanardi Fonderie to become a world leader in the production of high-tech spheroidal graphite iron. “It is with great honour and pride that I accept this award, which I dedicate to the memory of my father Danilo Zanardi, who taught us the value of hard work and corporate social responsibility,” stated Franco Zanardi on stage at the Auditorium. “When I decided to devote my life to the family business, I had only one goal in mind: I wanted to turn it into a research and innovation laboratory, on par with a university, and I have been committed to this for 50 years.” He continued, “I accept this award honouring the commitment of those who laid the cornerstones of Zanardi Fonderie, and that of the fourth generation, which today carries on the company’s history.” “Many thanks are also due to a community of workers and trade union representatives who have always worked transparently in the interest of the common good, in a constructive manner.”